I can’t tell you how much I love this deck — but I’ll try.

The Wild Unknown’s creator Kim Krans has captured the essence of each card, the art is at once stark and minimal, but deeply rich in mood and meaning. A truly unique and iconic deck with only winks and nods to earlier traditions. Her bold use of black and white contrasts in pen and ink shows us the dualism of physical manifestation — but the diversity of her strokes, the density and direction, the sparing use of colour for emphasis, encapsulates the diversity born of the primordial split between dark and light. With no human figures in the deck (well, save for a hint of one), it gets us in touch with the deep primal roots underlying all our psyches. It cuts through our human problems, and yet still speaks to those problems objectively. It reminds us that the natural world is unbiased, and that we are not separate from it. The deck simultaneously asks us to step outside of ourselves, and yet look deep within. Kim reminds us of the inherent spiritual thread running through nature and all of physical existence. There’s no running away from our nature — we need only embrace it to discover the answers waiting within and everywhere around us.

A first, weird experience before I even had it in-hand

Even before ordering, I soaked the images in. Their visual simplicity impacted me, their underlying complexity unraveling behind my eyes. This was a deck I could not only understand, but RELATE to. It was my door for moving from a casual (and abstract) dalliance with the Tarot to deep contemplation and study.

I opened the door, I clicked “Buy Now”

While I was waiting for delivery, one night I had an argument with my neighbour. The argument itself was rather trivial: a territorial issue over our shared hallway and indoor staircase. It was also the dead of a long and tedious winter, so we were both understandably on edge. At the top of our staircase between our doors, we’ve put up hooks to hang our winter coats, and we leave our winter boots there as well. As you climb the stairs, his door is to the right, and I’m to the left. We basically couldn’t agree on how to share the space; he had his view, and I had mine — I’m a very “my half, your half” kind of guy, and he’s more “coats on one side, decorations on the other”.

Although I understood his view, I still thought I was “right” and when explaining my view he got stubborn, closed up, and refused to talk or find a resolution, hiding in his apartment.

So I was stuck. What do we do when we’re stuck? Turn to Tarot! I decided to use my “clean” French Suits deck, part of my abstract study (not great for reading, but excellent for studying other decks)… and these were the cards that turned up:

9 of clubs, Trump 12, and Trump 9. I’d been studying TWU cards, they had imprinted on a part of my mind, and guess what? These were the correlating cards:

9 of Wands, The Hanged Man, and The Hermit. I was flabbergasted. The 9 of wands was enough — how was my staircase in this deck, and how did it come out in my draw when I didn’t even HAVE the deck yet? If that wasn’t enough, the bat, our coats, as the Hanged Man, and The Hermit as his reaction… it was blatantly clear: this deck shows what’s going on.

I’d had synchronistic events before, but an exact picture of the situation?! No stretch needed, no mental gymnastics, no interpretation needed. Just a plain as day picture of what was going on.

Not only that, but it was clear what to do about it — and I didn’t like the answer:

NOTHING. this is going to be a difficult climb that will leave you feeling stuck. Hang out for a bit, let both parties cool off in solitude, and wait for perspectives to change. Pushing the struggle further will only lead to further alienation, but be alert and keep your eyes and ears open.

Not much has changed. But I have observed things that confirm retreat as the best tactic. I know I’m being vague here, but some details are boring; others are too personal 😉

At any rate, onward and upward!

The deck arrived… all my winter troubles were forgotten as I opened the box. Attention was paid to every detail: a message inside the box lid, a trifold paper in lieu of a little white book, a black satin ribbon to lift the cards out. The cardstock is thick with a matte satin finish — they FEEL great to touch, and make the most wonderful sound as they slide over each other while shuffling… schoock schoock schoock 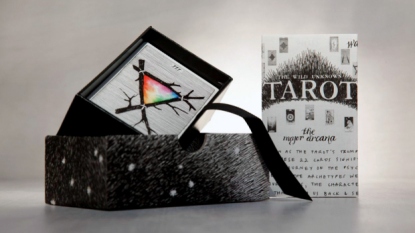 In getting to know this deck, I not only journaled about it, but I practiced re-creating the illustrations on index cards. This is a really great exercise for getting to know your cards, but I don’t recommend it for really complex decks, unless you are going to simplify considerably, maybe only drawing certain important symbols as they jump out. After illustrating, I’d write and write and write on more index cards, and they are all filed in a box. As often happens with me, I have not yet referred back to the journaling, but the exercise itself carves a deeper imprint — highly recommended exercise, and a perfect deck to do it with! 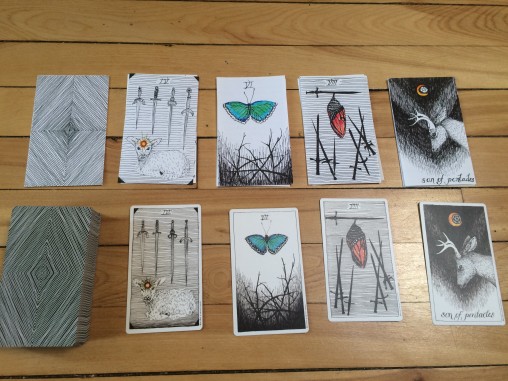 The deck has not disappointed, either — it remains my #1 reading deck, and I give the most insightful and accurate readings with it — partly because I find it difficult to put down, so the more I use it, the more it gives back, but also because it’s just such a well constructed interpretation of the tarot structure.

Get lost in the images. Let them impact you. Let them not only show you what you need to know, but listen deeply to what they awaken within you. Walk through the deck like you would walk through the wilderness: revelling in its harsh beauty, listening to the orchestra behind silence, aware and alert to danger, but at peace with the balance of nature.