Ever have a case of double-identity? These Majors sure do!

Strength to Justice: “You’re an 8” 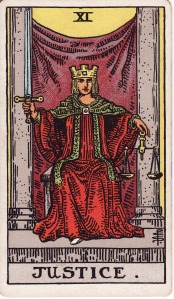 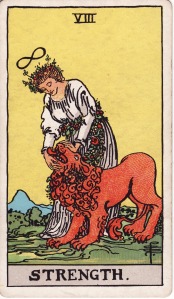 Hmmm… this could go on a while… but does it really matter?

Depending on how you learned, and what structure you use most, you might have some pretty strong feelings about this. For me, it ultimately doesn’t matter so much, what matters is which cards come out of the deck at the time. It may matter more if you associate the numbers of the Majors to those of the Minors.

Strength as 8 makes sense because the strength depicted is about balance, and 8’s are an expression of balance and stability—they are double-stable, being twice 4, and true strength, as opposed to brute force, comes from a stable root. That stability can also be seen a the 3-dimensional expression of the 2-dimensional stability expressed by the square, with its 4 corners and 4 edges. The 3-dimensional form of the square, the cube, has 8 corners, 8 possible directions joining 6 planes. The cube is both strong and vulnerable, it has a stable structure with a spacious interior—there’s a reason we live in boxes 😉

As Justice, 8 makes sense because of balance too, but in a different way. There’s something out of balance, that Justice is attempting to make balance of, weighing both sides, which could very well be nearly equal, like 4 on one side and 4 on the other.

In either case, 8 follows 7, The Chariot, which is about taming wild energy and opposing directions, which takes both strength and results in justice. The Charioteer, in a sense, is an active representation of Justice—the process she goes through before making her decision. At the same time, the brute force that The Charioteer uses to tame his horses is resolved by Strength’s softer touch—an inner harmony that tames the wild and dangerous beast!

As 11, the number itself signifies a pairing, or duality, which also represents balance: one and one. There too, either way the balance can result in Justice, or, like taming the opposing horses in The Chariot, requires Strength. Also, 11 follows The Wheel, which, as Karma, results in Justice… but at the same time, Strength may be required to manage what that Wheel spins out! Additionally, time, Karma, strengthens us.

So, a legitimate argument could be made for either’s placement in the Major Arcana. They aren’t the same, and they aren’t really even two aspects of the same thing, but they are related. For me, what would be more interesting is if other “Justice-y” cards came up in a spread with Strength, like the Queen of Swords or the 2 of Swords—then I would interpret Strength almost as if it were Justice. And if Justice came up with “Strength-ey” cards, like 6 or 7 of Wands, or Knight of Wands, then I’d interpret it as if it were Strength.

Then there’s associations with the Minor numbers. 8’s in Tarot are, as discussed earlier, about stability… but they are also about persistence, accumulation, build-up, and are on their way toward the burden, and subsequent completion, of the 10’s. So, if a bunch of Minor 8’s come up, but Major 11 has also been drawn, then regardless of whether 11 is Strength or Justice, the 8’s are pointing to the 8 Major in THAT deck, or are saying, “hey, read this 11 as if it were an 8.”

With 11’s there aren’t really 11’s in the Minors—the Pages/Princesses/Daughters/Valets are often assigned 11 out of convenience, but for me the Courts are un-numbered because they’re their own thing—related to, but not an extension of the suits they rule over. 11’s could be associated with Aces, a “doubling” of the Ace’s power, or they could be seen as 2’s, the number 11 closely resembling the visual representation of Roman numeral II, like the Pillars in The High Priestess. For me, relating the 11th Major to the II’s makes the most sense—not only is the High Priestess a representation of both Strength and Justice as she sits between the pillars of duality, but also because the in Minors 2’s represent duality, balance, opposition, co-dependence, and polarity. These, too, contain shades of both Strength and Justice.

OK, that’s all very interesting, but what’s the ANSWER?

Well, there is none, really. it all comes back to: what is the question, what is the context?

Having Strength or Justice show up in your readings is like having a double-identity character show up in a movie—they add intrigue and depth, two-for-one space, but they can be hard to follow keep straight in confusing plots. Ah, the wonderful shades of humanity expressed through Tarot!