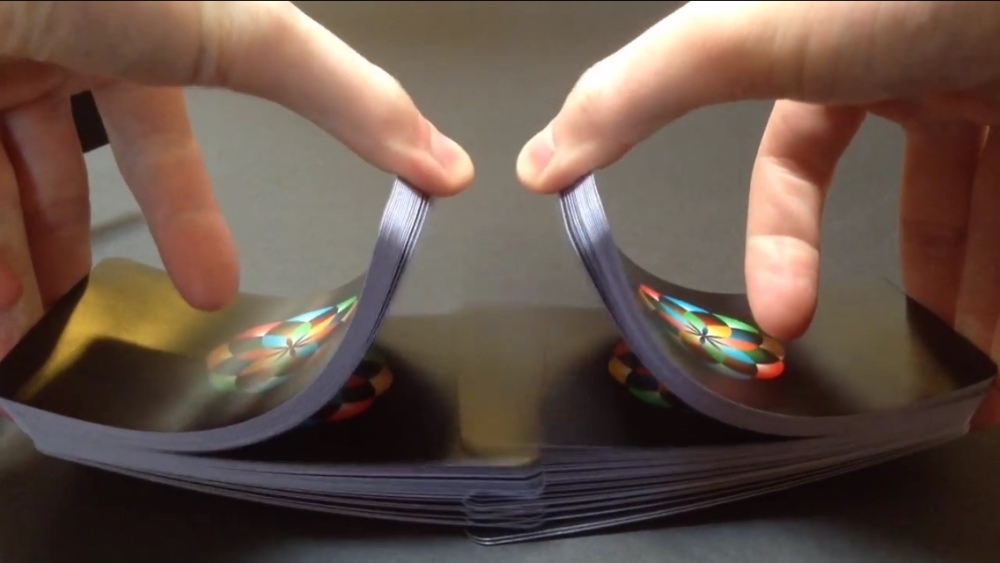 E.E: recently I saw my heart in an ECG. It seemed like lightning falling on the same tree, over and over.

The way I see it, systole and diastole, understood as expansion and contraction, are the two grammar rules of the symbolic world.  There is a tendency among tarot readers to understand the tarot in a card by card scheme: “this is this”, and then “that is that”. I don’t find this scheme useful. If we were to set all these the Marseille’s pips in order, this is, if we were to force stillness in a system whose very structure is the shuffle, we will see things expanding from the Aces to then X, or contracting from the X to the Aces. Those patterns can be mapped into several analogies: duplication, diffusion, opening, closing, weaving, stacking, entanglement… Eventually those analogies could pinpoint specific processes within people’s specific situations, but they all start as abstract patterns. That is why I see the Marseille tarot as a window into the life of forms. Once one understand these patterns, once one learns to map analogies between them and the anecdotal level of human experience, one can read the waves, the sky, the trees, a dream or a flock of birds… Right then, everything speaks.

At this point, the tarot itself could become a little limiting.

Personally, I am more interested in the tarot’s potential than the fulfillment of its promises. Sometimes you have to lend your eyes to the hungry, the tarot has to come out, questions are asked and answered. But those have become exceptions within a private, contemplative, practice. To make the tarot precious I rarely look at it. On a daily basis I prefer to look at other models. I think we somehow have that in common. In my case, that model is the alphabet. To you, the model is sacred geometry.

I return to the images is due to a sheer love for them. What do you think you gain from remaining close the the tarot’s scheme?

MBD: In a word, familiarity… It’s a kind of familiarity, though, that provides just enough obscurity to approach the random chaos of life with some objective distance. I think sticking to the Tarot’s scheme serves as an anchor. At the same time, it’s a jumping off point.

In many ways, I’d prefer to just give advice or have discussions or share experiences without it… but I find the abstract randomness of a codified structure opens new doors and shifts perspectives in ways that a “tool-less” conversation might not — we just have to be careful that the doors lead us out of the structure or minimally help us navigate through it rather than confine us within its walls.

It’s the very structure, however, and its randomness, that keeps changing the pattern so that we constantly see it differently. Or, at least, it tries to point out our preferred patterns and show us those that we are not as comfortable with or are simply unaware of.

Speaking of preferred patterns, I seem to be developing one here: talk about Tarot, then talk about yoga, then go back to Tarot again… It seems a useful convention, so I will continue with that for now, while also observing that it is becoming a preferred pattern 😉

In yoga and (Buddhist) meditation, we build very logically, very sequentially, to develop the capacity for people to sustain difficulty, whether that is through physical posture, duration of attention, or observation of mental and emotional states. So for instance in meditation, we start with training the mind to be present for a few moments at a time, and the rest of it we just leave alone. That is sometimes done through breath, body sensation, or “mindful” moments that use anchors, like every time you go through a door, stop and feel your breath, or your feet, or the colour or temperature at that moment… and then continue on. Most of us miss at least half of the doors we go through to begin with!

As the capacity for presence develops, we then more actively cultivate the pure emotions of Joy, Compassion, Equanimity, and Loving-Kindness, progressively including more and more people in that process, from our close friends and loved ones eventually toward our enemies. It’s not so much that we are “sending Loving-Kindness to our friends,” although that’s part of it, we are also observing our reactions to when we do (which begins to build equanimity). We then continue to “send Loving Kindness” to those considered “neutrals” and watch our reactions to that shift, and finally move on to our enemies or people that are unkind, greedy, hurtful, etc, and watch our reactions there as well (what makes this person worthy of my Loving Kindess; what renders me able to deem them un-worthy? How does it feel to send Loving Kindness to a friend, compared to an enemy, compared to a neutral? And so on…).

Then it continues to observing our negative emotions, or our reactions to “negative” situations, or those that are more difficult… Some of that stuff already comes up when working with the neutrals and enemies in Loving Kindness meditations, but now it’s more direct, less peripheral. So it goes step-by-sequential-step as we build more and more capacity to manage the difficulties life presents us. Eventually we work with Death meditations, where we imagine our own death and watch our reactions to that inevitability. We prefer to ignore death, or cover it over with various beliefs rather than face the realities of it — at least until it faces us. Even then, we’re creative about avoiding our fears and other issues surrounding death… But these practices are considered quite advanced, they are not introduced to the novice, because Buddhism recognizes the need to build capacity before tackling these larger and more difficult matters.

Now, in an ideal situation, from a strict development and logic perspective, this is the way to go — it just makes sense to follow the order: begin with easy things, and gradually build toward more difficult things. Move from simplicity toward greater complexity. Walk a steady path that gradually inclines to the end… whatever that is (steady decline, or just a cliff, maybe?).

That’s not quite how life happens though. It’s a little ridiculous to say, “I haven’t reached that subject yet in my meditation practice, so these things in my life are not allowed to happen until I’ve learned about them in meditation” …but we do it all the time. 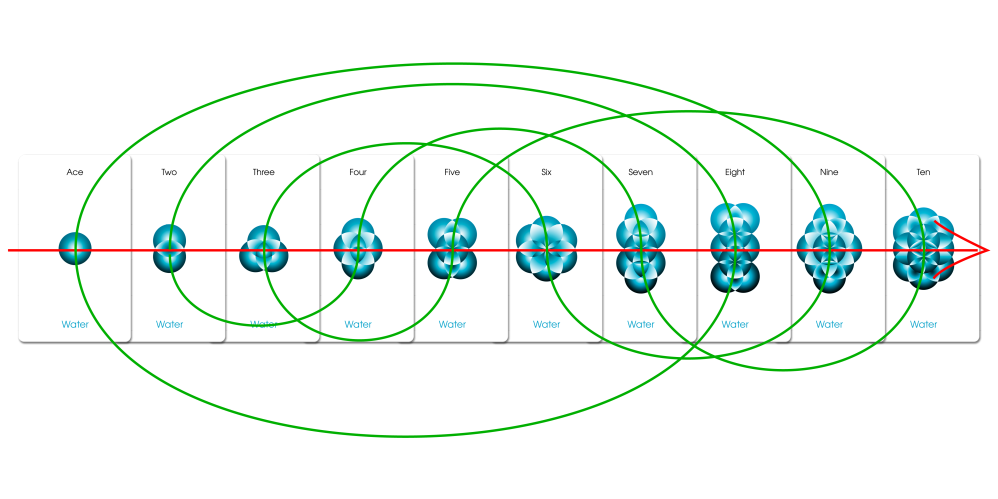 We like to think we move sequentially through life from Ace to Ten, but of course it’s more like we move from Two to Eight to Ace to Nine to Six to Three to Five to Ten to Seven to Four… and not only that, we jump across elements too, often when we’re not equipped to handle them. Life is a shuffle; much more like a randomly ordered deck than one in sequential order. 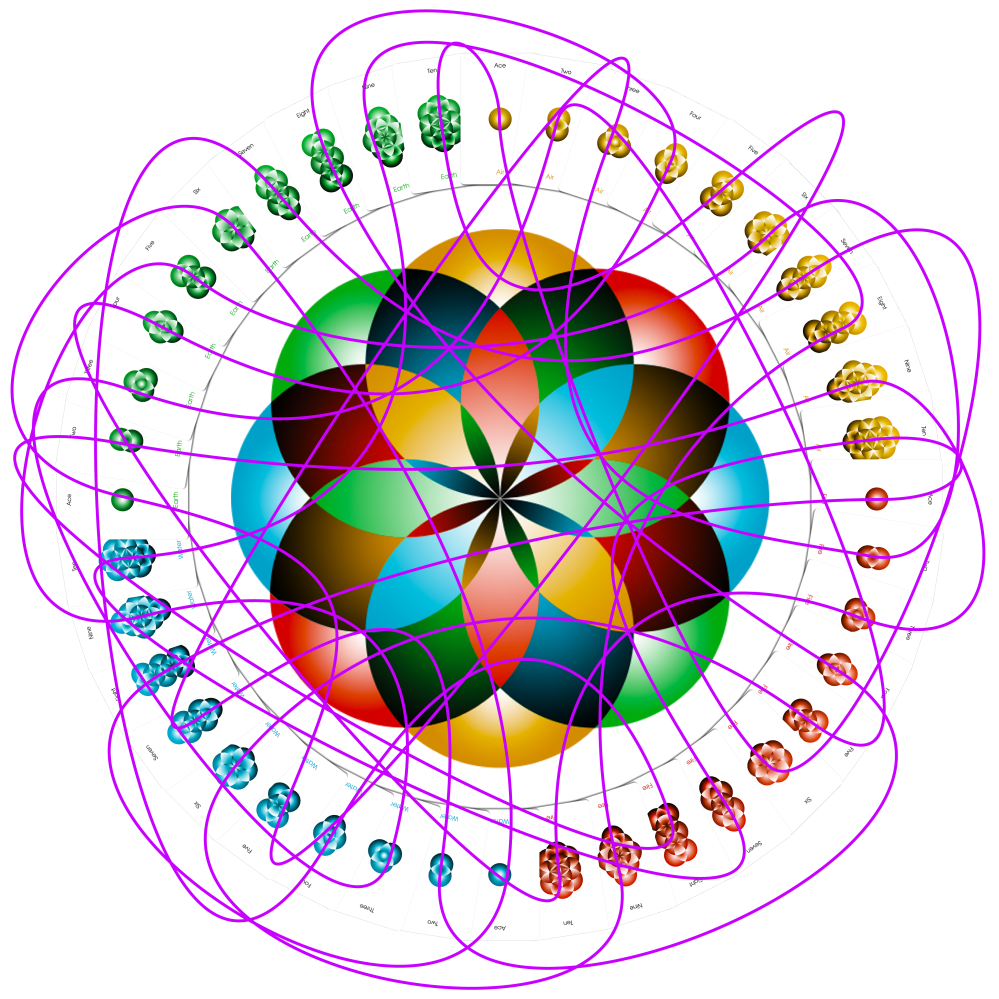 And so what I like about Tarot is that in its randomness, or more accurately the random presentation of an underlying order: we never know what is going to turn up. This is much more like life than the logical, sequential, systems of yoga and meditation… not that we don’t work with randomness in those modalities too, but their practice generally follows the sequential structure.

So this shuffle, randomizing the cards and then looking at what comes out of that shuffle, affords us the opportunity to look at the good and the bad, the comfortable and the challenging, in a way that prepares us for situations that may or may not be happening for us now, but we will nonetheless encounter… perhaps as soon as tomorrow, perhaps as far away as 30 years from now. It also affords us the possibility to approach our responses and reactions to situations we’ve already been through, and think of them in different ways. The practice of drawing cards and interpreting and discussing them, looking at what they could represent, is kind of like rehearsing for life in the same way that aspects of meditation do.

The difference is that the Tarot doesn’t care if you’ve done the preparatory meditations, it doesn’t care if you’ve studied the Ace then the Two and then the Three yet, it will present the Ten at any point, whether you’re ready for it or not. To make sense of that, we make connections and find patterns, even when the patterns are arbitrary… and so this is where divination comes into play — “the fulfillment of its [tarot’s] promises” as you say… but its power — not just potential, but real power — lies not in our mapping the patterns we find in it on the randomness of our lives in order to make sense of the nonsensical, but in its ability to draw our attention to that process.

Tarot’s power — not just its potential, but its real power — is in its ability to draw our attention to the process of making sense of the nonsensical

I think you’re right, we’re very similar in this regard: we’re interested in the tarot’s potential power as a tool of awareness. In order to do that, though, we may need to let people do the natural thing of mapping one randomized structure (tarot) on to a randomized set of experiences (life) in an attempt to find some pattern because in that process, attention has been called to things that the person may normally have been ignoring. What matters is not whether the “divination” is “true” or not, what matters is the attention that is brought through the process — this is where the magic really is.

You also said in Tarology that “Anything you stop ignoring becomes absolutely fascinating.” This is the benefit of the structure, because we know there is a structure to Tarot, and by randomizing it, we are looking for that order. But, we tend to exaggerate the significance of the order itself, rather than what happens in that interaction.