Continuing from structure and randomness…

E.E: The first metaphor in tarot happens when we shuffle the tarot. There is a carnivalesque stance in this debasement of hierarchies. I associate this with sabotaging reality. Shuffling the deck sabotages the order of the cards just as we, by shuffling the cards, hope to alter our understanding of reality. Sabotage can be paired with irrationality. There is something irrational in expecting anything from pieces of cardboard. Irrationality, then, becomes subversive, as it transcends our convention of what is “there”. At this level, notions like “The Fool”, or “The Pope” are useful only as far as they suggest a structure that our shuffling puts into question.

At a different level, The Fool allows me to look at the lion in Strength in a different light, just as The Pope has me seen the Devil’s minions in a different way. Other than that,  notions like “The Pope”, or “The Fool” seem dated, even as literary tropes.

I see the patterns you create with your deck, which are absolutely beautiful, and I wonder: Why printing names: Hierophant, Lovers, Magician, on the cards? 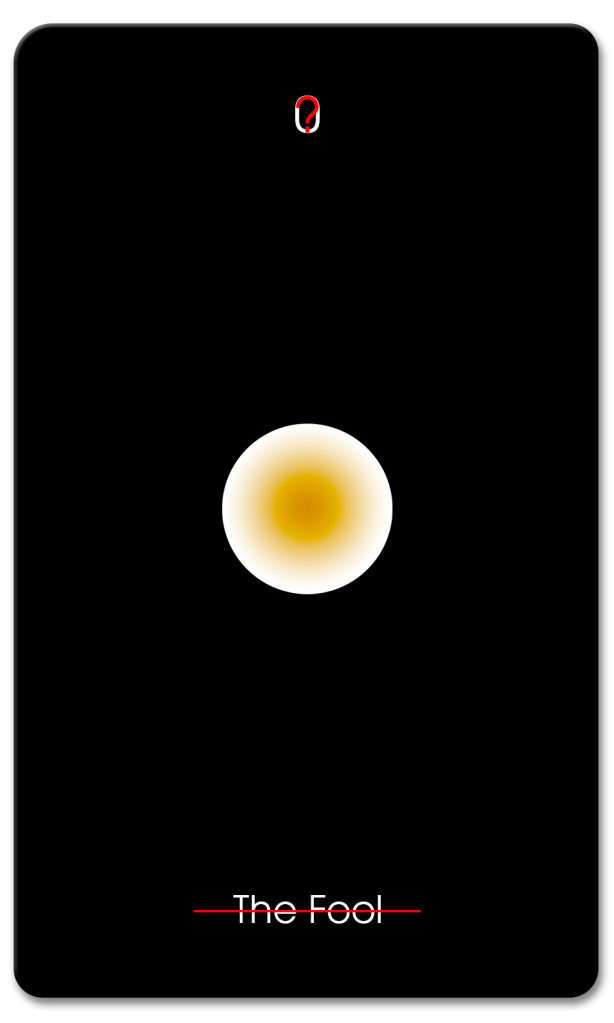 MBD: I agree completely about subversion — what a fantastic process! I see this clear relationship between subversion and sabotage as being oppositional methods toward a similar goal, with often opposing results, too.

Sabotage is destructive. It acts from the top down; from the outside in. It’s violent and sudden, like The Tower. This is sometimes necessary, but the reaction is commensurate to the severity of initial impact. So while sabotage may cause tremendous and inevitable change, the rebound is risky… especially if that severity is premature: when the system is not yet ready for that change, the result will actually oppose the desired effect.

Subversion on the other hand, is softer, or at least more subtle, and not as extreme or violent. Unlike sabotage, it acts from the bottom up; from the inside out. Because it’s more subtle, the changes are not so readily seen… But those changes have more resilience, they can be sustained over much longer periods of time. Subversion is more like Temperance.

Together, The Tower and Temperance sequentially flank The Devil. In my opinion, the ultimate change card: XV doesn’t tell you how to change, he represents the change itself… or rather, he suggests that illumination is outside of the structure — whether by subversion of sabotage, the structure must be transformed. If subversion is unsuccessful, sabotage may be the next option.

With the Orbifold, I’m in some ways effecting change in both ways — sabotage and subversion. Sabotage in the imagery, being a sheer break from what we’re used to seeing, like The Tower being destroyed and rebuilt. Keeping the names, though, or only making subtle changes to them, is subversion: it tempers the abstracted sabotage I’ve performed with the imagery.

Can you see my devil horns growing?

So while there may be the initial Tower-like shock of unfamiliar imagery, the aftershock is Tempered by the familiarity of name and structure.

To really sabotage tarot, instead of shuffling, we should destroy it: rip it up, burn the pieces, throw the ashes in the air, and then read those… but we don’t do that (well, not in common practice, anyway) because the structure is useful.

I only see total sabotage as necessary when the system is broken to begin with, and I definitely don’t see the tarot as being broken at all. Sticking to the traditional names (for the most part) even if they seem outdated retains enough structure around which to rebuild. It’s a structure that stands truer when the stains and weeds and overgrowth of cultural affectation are removed to reveal its inherent brilliance.

The names may seem outdated, but are not, in my opinion, obsolete. They communicate the timelessness of our various roles and ranks in human society of all times and any time. We still have teachers and spiritual leaders, even if the role of “Pope” or “Hierophant” are not the same as they were in medieval Europe. Our current Pope understands this: he really does represent subversion. He made his way right through the system to the top… And is making some pretty major changes to how the Church views its own moraes, and by extension how its partitioners view some long-held but outdated and anti-Christian beliefs. Talk about change from within!

In many ways I’d prefer to see the entire structure destroyed, sabotaged, but even today Christianity’s foothold is so strong that greater global change can be made through subtle shifts within the Church than its destruction. What would the backlash be if the structure were totally destroyed?

With Tarot, we’re more subverting the order when we shuffle than sabotaging it. We’re subverting our view of reality by taking cards from within the deck and putting them on top, taking top cards and burying them underneath, sifting the bottom cards upward… and then sometimes subverting the subversion through our selection method, too, by cutting the pack into smaller piles, taking cards from the top or the bottom of each pack, or both, or fanning them and selecting that way. It’s an active participation that says, “I’m ready to have the order of my life as I understand it changed… but only within certain parameters.”

For most of us those parameters are pretty narrow. We want to change, but only on our terms and only so much. This is probably for the best: severe and sudden change (sabotage) carries with it a kickback that is proportionate to the severity of change — and that kickback, that rebound, goes in the opposite direction of where we really want it to, a direction no longer useful, and possibly more detrimental than the original course.

All that said, however, the names do restrict the application at times. The names define the interpretations in ways similar to how scenic imagery does, as we were discussing in Part 3. I’ve considered removing the names and only using Roman Numerals for the Majors, numbers (Roman or Hindu-Arabic numerals) and Alchemical symbols for the Minors, and probably a combination of Alchemical symbols for the Court cards, or some alternate signifying system… or just removing any name and number system entirely to let the images speak for themselves.

But I knew that there would already be enough unfamiliarity with the imagery that the “simplest” way to go was the traditional name and number system (with slight variation). I also wanted to stay away from having to add any extra symbology like Astrological and Hebrew correspondences, which might be expected to accompany the alchemical symbols, and would then overcomplicate things again.

I also kind of like the brain-bend that happens when we juxtapose the old with the new, like when a string quartet plays rock music, or when an old church is converted to modern lofts… or a Tarot that uses archaic names with progressive and abstract imagery. There’s a weird kind of interior search happening with this juxtaposition that tries to make sense of the modern with the outdated, and the search result is deeper investigation into where we’ve been that gives a different view of where we’re going. At the same time, a modern perspective allows us to view our past in a fresh, new light… we are, forever, The Fool.